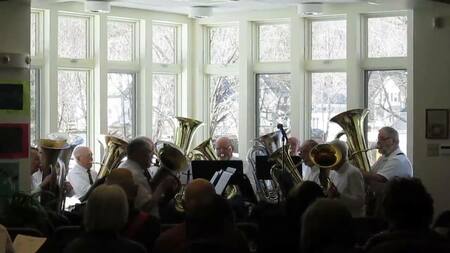 The tuba ensemble "Low Commotion" will present a concert at 2 p.m. Sunday, August 8, at the West Paris Public Library     (Arthur L. Mann Memorial), 226 Main Street, West Paris. The concert will be held outdoors on the lawn.

In case of inclement weather, the concert will be held indoors at the nearby First Universalist Church of West Paris.

Low Commotion, which was formed in 2013, is an ensemble of euphoniums (tenor tubas) and full-sized tubas. The group performs several concerts each year at senior living centers, veterans homes, churches, and libraries. Literature performed ranges from jazz, marches, and contemporary music.

Sponsored by the Friends of the Library.

For more information, contact the Library at 207-674-2004 or librarian@westparislibrary.org.